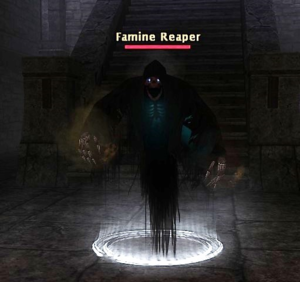 
Organization: Each time an enemy spawns, there's a chance a reaper will spawn as well.


Description: Famine Reapers can cast various spells, which deal extremely high damage but can be evaded/absorbed. Their variety of the spells depends on their CR. In spite of their appearance, Reapers are not undead, which means they can be charmed. Famine Reapers remain stationary while casting their spells but are quick to teleport on top of the player if they do not have line of sight.