"The leader of the mercenaries you are about to face. Dom is as deadly as he is unpredictable. The band of mercenaries he leads is very close-knit. He doesn't take jobs based on financial gain nor concern for danger - he seems to have other motives, which I've been unable to fully discern. Unfortunatelly, due to his brash and unpredictable nature, it can be difficult to determine where he will turn up next, and for what purpose.

Be careful when dealing with him. While he may seem to be cordial, Dom's motives are clouded in mystery, and he leads his victims into a false sense of security. I'll remind you that he can be extremely brutal when he wishes. I've seen him drink wine from a skull belonging to one of his fallen enemies. He may be insane, but there's a method to his madness." 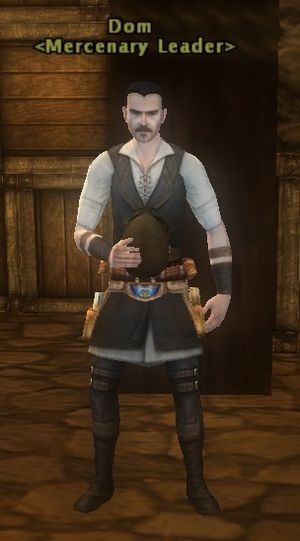 
Description: During the fight, he often change places with Slam if you target him. So, it may be safe to destroy the elemental before focusing on him.