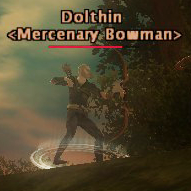 "I can vouch for Dolthin's skills with a bow. Formerly a soldier in the Netherese army, he was among those reported killed in action after a failed mission with heavy casualities. I haven't been able to get him to admit it outright, but I highly suspect that he may have actually died there and was later ressurrected through some dark means. He claim he was sent to aid Dom in his missions. Dom calls him Pep-Pep, but I can't for the life of me figure out why."