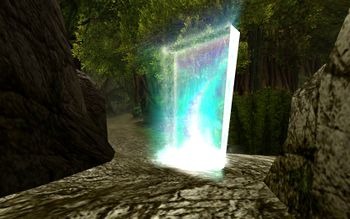 This spell offers a unique benefit often valuable in quests and it is frequently requested from arcane casters. Situations where dimension door is useful include:

Dimension door scrolls cannot be bought in shops (but are commonly found in random treasure). Therefore, it is recommended that wizards select this spell during level-up.

Some quests, however, seal off the entrance from the rest of the dungeon after certain conditions are met. If you take a Dimension Door in such quests, you won't be able to access the end chests. Quests where the entrance is locked include:

Additionally, most raids feature a locking mechanism to prevent late entry / re-entry. This also punishes the users of Dimension Door. Exceptions are Caught in the Web, Hound of Xoriat, Tempest's Spine, and The Chronoscope.

Additionally, Dimension Door effect is available in a few quests: