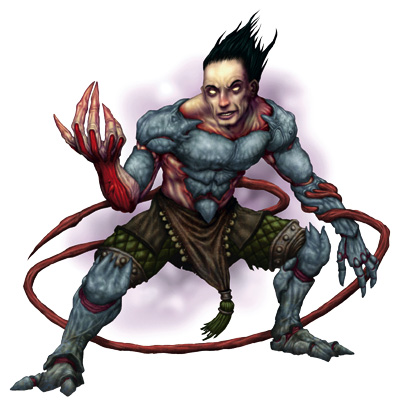 The daelkyr are extraplanar creatures that are native to the realm of Xoriat. Daelkyr are said to look like extremely beautiful and shapely humans, but with a hint of madness in their eyes and chitinous armor covering their bodies.

They are responsible for most of the aberrations in Eberron, including beholders, dolgaunts, some symbiotic creatures, and many others.

The daelkyr attempted a planar invasion during the time of the Dhaakhani empire, releasing hordes of their aberrant creations into the material plane. It took an alliance between the goblinoids of the Dhaakhani empire and the orc druids of the Gatekeepers to repel the invading daelkyr, cutting off the plane of Xoriat from Eberron and sealing the remaining daelkyr and their servants within Khyber.

These remaining daelkyr are the stuff of nightmares, and common folk often tell stories of these alien beings believing them to be stories and nothing more.