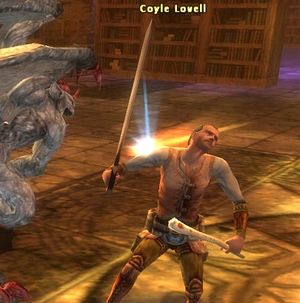 Description: Coyle Lovell is an infamous named NPC whom players must protect in Escort the Expedition and Hold for Reinforcements. He seems to be some sort of Fighter/Wizard since he is dual-wielding a Long Sword (main melee weapon?) and Club (spell amplification?). But do not expect him to help you with those weapons and his spellcasting, he rather causes trouble on himself...

We meet Coyle again in The Abandoned Excavation as Kharvos Valadan, a worshipper of Khyber, the Dragon Below. Perhaps next time House Deneith should be more careful with which NPCs you need to babysit.

Coyle is sent with you, alongside two Deneith Explorers, to reach the Library of Threnal.

Coyle is at the center of the Library with two Deneith Explorers, and will fight alongside you any monster that arrives in the field. When you talk to him, he will reply:

If you interact with him while he is unconscious, he will say:

At the end of the quest you meet a man that looks a lot like Coyle. When you approach him, he will say:

Right at the start, you find Valadan's corpse. It looks like his skull was crushed by the impact of a massive club.