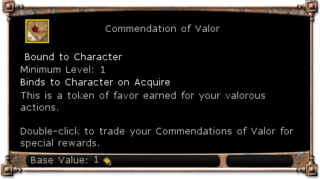 Double clicking a Commendation of Valor brings up a Barter UI with the following options:

As of Update 20 Patch 1, Heart Seed option has been implemented. 42 of these can be traded in for Iconic or Epic Heart of Wood. I.E., players are now able to accumulate their Heart Seeds account-wide, towards the Heart they want. See DDO Forums CoV Dev Update.

CoV are also used as an ingredient to create Thunder-Forged and Legendary Green Steel items.

Amount per quest level and difficulty[edit]

The amount of CoV rewarded upon completion depend on the quest level (modified by the choice of difficulty) and the difficulty the quest was run on. The amount is given by

The graph below shows the amount of commendations of Valor given based on base quest level. It is also valid for raids that can be run on epic difficulty. 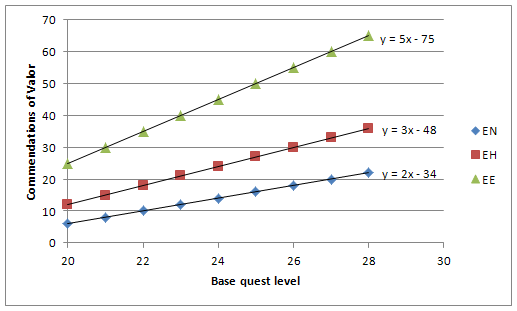 DDO Bonus Days event can increase the amount given per a reward list. This means that above number is not hard-coded and can be changed by sever-side parameter.

As of Update 21.1.1, 100 CoV limit on reward list has been removed and it should now return the calculated amount of CoV (DDO Forums).

Claimed Commendations of Valor do not stack with other commendations in the inventory and aren't auto-gathered by ingredients bags. Be wary of this when collecting large numbers as they can quickly occupy large backpack spaces.

Maximum Commendation stack size is 99,999 for one inventory slot.

For more information: Commendation of Valor XP Bonus Gains has a detailed explanation of how your reward is calculated.