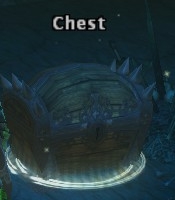 Description: You can identify them from normal chests by selecting it. If it is a disguised mimic, the focus will create a circle under the chest. Sometimes, they will also show up a health bar in the focus orb.

It can't be attacked until someone tries to open it. Defeating it may or may not spawn the real chest.