Brothers of the Forge

From DDO wiki
(Redirected from Cannith Training Facility No. 14)
Jump to navigation Jump to search

Unlike other epic quests, this quest has a minimum level requirement (level 24). 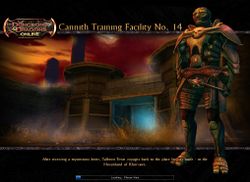 Speak to Talbron in the House Cannith Enclave to join him on this journey home.

Fairly straight-forward quest. Break boxes to find patterns. In two rooms, you will have to use the training patterns to open the way to proceed. In the second room, there will be an explosion which trips you.

Talbron Tewn will help you while fighting and will hamper you while sneaking. He will follow you around, by teleport if necessary. Minor bug: Talbron will occasionally get stuck (one incident witnessed, likely due to a momentary loss of Internet connection), but not having him nearby doesn't seem to impede quest completion (he won't help/hamper, though).

Fellsting can appear at various locations. Killing it awards a chest.

At the top of every 'stairwell' there are pipes you can climb on (Jump 30 is fine) where the mobs can't reach you. Just gather and kill.

Once inside the Elite Training Chamber, you won't be able to retreat back to the Cannith Training Facility until the quest is finished, so be prepared.

During the final fight, Spotter Drones and Cannith Sentries will keep spawning.

Killing Gorrin will kill all remaining monsters as well (at least one exception witnessed: a lone Spotter Drone survived).