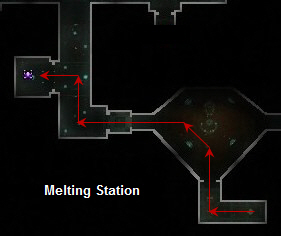 The Cannith Melting Station is one of the crafting altars added in Update 11 located just inside the entrance of House Cannith Manufactury. It is used to melt down the ingredients found from enemies in the Manufactury, Artificer Workshops, Research Facility, and the associated quests. The resulting ingots, alloys, and compounds are used at crafting altars located in the Workshop and Research Facility to awaken set bonuses, reforge prototype blanks, and other things. A second Cannith Melting Station can be found in Sharn - Cliffside Docks District.

Currently, the ingredients found from enemies (as mentioned above) are named differently in the Melting Station's recipes vs. the actual ingredients, but they are the same thing: